On a related note is the commentary on the SpaceX asking why were so few women in the photo? Gwynne Shotwell and SpaceX has put major effort to reach out to women and minorities. I swear, I thought I saw maybe a year or over six months ago an article on SpaceX how they have over a thousand women engineers, and it included really large photo of a crowd of women and their female director with a capsule in the background. The were excited about the falcon heavy. I don't get it.... I can't find it, anywhere.


I found this piece from spring of last year: ‘Shotwell shared a quote from former U.S. representative Bella Abzug, which stated, “Our struggle today is not to have a female Einstein get appointed as an assistant professor. It is for a woman schlemiel to get as quickly promoted as a male schlemiel.” For Shotwell, Abzug’s words still ring true decades later.’ as quoted from the 33rd Space Symposium 2017. http://www.satellitetoday.com/launch/2017/04/06/gwynne-shotwell-future-women-spacex-space-industry/

In a recent piece, 'She strongly believes you should not have to downplay your gender to thrive in male-dominated industries.' https://yourstory.com/2018/01/lessons-from-the-life-of-gwynne-shotwell/

And they do reach out at local events: https://www.eventbrite.com/e/closing-the-gender-gap-in-the-tech-industry-tickets-39244291733#

Does the media not cover women in #STEM the same way we cover men in #STEM? Is that why women don't think of places like SpaceX as a place they want to work at? Gwynne is the highest person payed at SpaceX. SpaceX is rumored to have about 14% women in #STEM. If that is true, that is low among tech, but I'm not sure if that's low among aerospace. I think the risk of publicly having your rockets blow up as was common in the early years deterred many women. SpaceX was known to pay all employees slightly below average. Given the effort, risk and comparison compensation, I don’t feel that SpaceX is denying women. To support the contrary, even meeting random SpaceX employees, a SIGGRAPH conference speaker, was incredibly nice and encouraging and supportive of advancing women and minorities in #STEM fields. I was inspired when I heard the WiTI talk by Shotwell back in 2014. I would have joined then if I wasn’t doing my startup.

Yes, I’m deeply frustrated about inequality for minorities and women specially in a field that I dearly love, physical sciences. I’ve heard so much bullshit about feminism this and feminism that from non #STEM people, it makes my head want to explode. Change will improve only so long as we fairly call out those who are unjust, not just aren't photogenic.

Change accelerates when people like the girl in Happyrobot: http://www.veryhappyrobot.com/my-blog/gwynne-shotwell.html blogs… Or when parents encourage all their children to be engineers, or scientists, or even mathematicians.

Indeed, lets work together and all do better at promoting women and minorities among #STEM fields.
Posted by Shannon at 11:30 PM No comments:

Feminista scienceista media where are you? 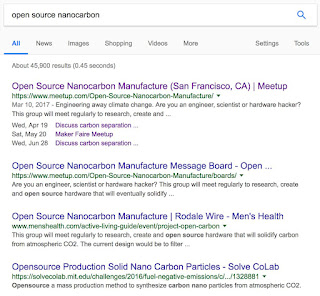 One of the first media outlets to pick up my #openscience effort on climate change was Mens Health according to Google. This was April of 2017. At the time I thought it was funny. Now, I see the really cool stuff I want to do is in Mens Health: blow up carbon dioxide, rip apart ions, use lasers, etc. I'm not a guy. I'm not a lesbian. I'm not even bi. (And it shouldn't matter if I were, either.) I'm a scientist, who also happens to be a woman. I don't picture myself like the glowing smiling women below. I like to picture myself in a lab or in a helmet. So when I saw that pic pop up on twitter, I said mentally to myself, pass. 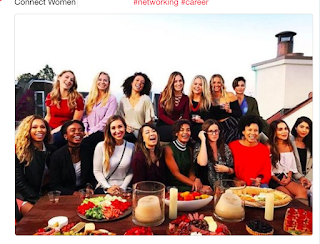 (It's from Women 2.0, and they were discussing the female safe and sanctioned way for women  to get ahead by networking.) 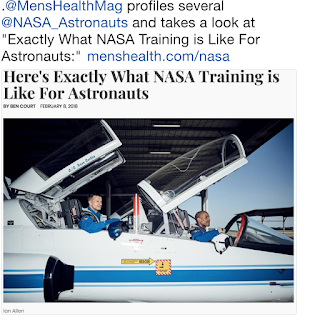 Then I saw this come up on my twitter feed. It was Mens Health on NASA astronauts training. And well, facepalm! Would this turn away women, of any age? Does NASA not promote  females? No, in fact NASA does promote women, and advertise to girls, often! So what's the problem, this is a mens outlet? It's a larger problem not specifically with NASA or Mens Health. In fact it's so large I don't even know of all the pieces.

One of the pieces is that women don't get marketed cool STEM tech or jobs. It's perfectly ok for Mens Health to run a story on how to get jobs NASA. But what about the equivalent female magazine or outlet? Should there be? Marie Claire ran a story on Gwynne Shotwell, and so did Elle and Vanity Fair. You can be in STEM so long as it's to rise to the top? And for anything else see a STEM outlet? Is there a women's gendered media channel that would show how to get cool #STEM jobs, and cool tech, say something that would show Anna-Katrina Shedletsky's detailed teardown of the galaxy note?

Would there always be a mens channel that's has all the latest cool tech, but no females anywhere to be seen? When reality the sciences and other STEM channels are busy trying to be gender balanced or neutral, but the men still get the cool tech. Is this just me?

I did check Womens Health Mag for similar STEM articles like the mens one, but I only found articles about how the a lone determined woman is able to transcend boundaries and make it in #STEM and mostly around International Womens Day and the like.

Maybe the problem is we (#STEM women) weren't large enough as a media channel to have some really cool hardware/maker/STEM media outlet that shows off the really cool jobs, tools, toys, tech for women. So, we need more Wired, Recode, Ars Technica, Salon, Axios, NPR, Economist, Scientific American, IEEE-Spectrum, Nature, Science, Popular Mechanics, Nuts and Volts, Make, etc... dressed up like Elle or Vanity Fair to show women (and men) we do cool #STEM too. Actually this is like the facebook, g+ feed or twitter feed of any woman STEM expert or STEM lover, minus the glossy Elle UI.
Posted by Shannon at 5:56 PM No comments: